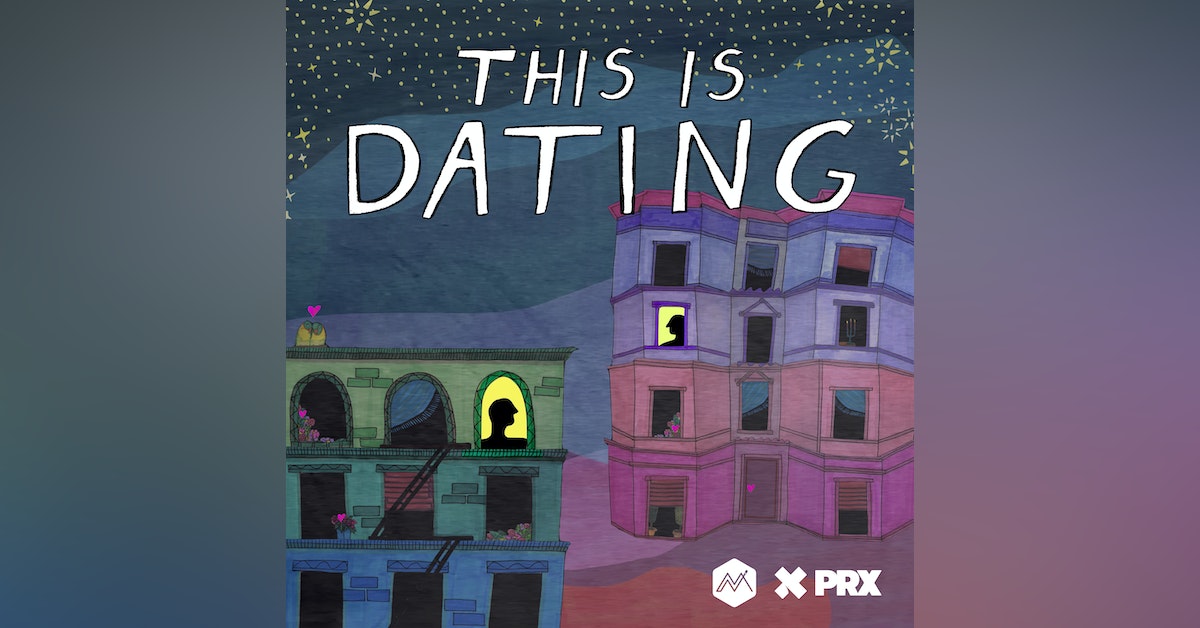 There are conversations you replay over in your mind weeks or months after you've heard them. The lastest Aziz and Manny date brought up something for Jesse that made her want to go a little deeper.

There are conversations you replay over in your mind weeks or months after you've heard them. The lastest Aziz and Manny date brought up something for Jesse that made her want to go a little deeper.

Jesse: This is Dating, I'm Jesse Baker. Real quick, before we start, if you haven't heard this week's date with Aziz and Manny, it's called "Attached: Aziz Date Two.". Go back and listen, and then come back and it'll make a lot more sense. So the Aziz and Manny date felt like it was the first time that kind of the space we wanted to create was happening. And it created this space that was allowing them to be themselves in a very unnatural, flat universe.

Manny: What would I be afraid to admit a first date? Wow. Well, I don't like, I think children annoying, but I'm, I would be comfortable. admitting that on a first date. I don't like children or dogs. I think there are definitely overrated. Um, but I would admit that on our first date.

Jesse: One of the things about being a producer or at least for me, is that long after the tape is done rolling, I'm still thinking about what was said and turning it over in my mind. And Manny went on to say something in that answer that I just, I couldn't stop thinking about for days afterwards. So when I have moments like this, there are people that I call and one of them is Hayden Dawes.

Hayden: I'm a therapist, I'm a researcher, I'm a speaker. I think of myself as a compassion warrior. So my, my job is to use my own experiences and that of other people that I meet to help us all kind of awaken and be more kind and loving and generous to one another.

Jesse: So Hayden, working on this show has been, has been really hard and really challenging and a lot of ways. Um, I've told stories for a long time, um, I've sat in people's discomfort in their marriages and their relationships for the last five years, uh, working on the, on the show with Esther Perel too. But this show has really pushed me and taken me out of my comfort zones in a lot of ways. So I want to play you the rest of that same answer, um, Aziz opens up about his anxious attachment style, and then Manny actually does come back in with something that, that is very, um, very vulnerable, I think.

Aziz: What are you afraid of?

Manny: I mean, I would say like, I, I'm afraid of getting to a point where I'm no longer desirable and I haven't found a partner yet. And I think in our community, that is a real thing. And it's it's everyone loves you, but like, then you're like, everyone loves you in the gay community and you get attention and then you stop because you've passed the "gay death." And I guess, um, yeah, I, that's probably not something I would want someone to know, cause you want to be confident. You want to be like, yeah, I don't know, you know, whatever, but the truth is is that there is anxiety in me. And, in a lot of my friends who are still single and gay that like, if you, if you do start becoming less desirable in the way you look, in the gay community, it is much harder to find partnership.

Aziz: Yeah, I mean, I think everyone struggles with that and that is like our version of the biological clock.

Aziz: Um, yeah, I think admitting your like needs and fears is kind of sexy also.

Manny: Yeah. I feel that.

Jesse: You know, this was a moment where it felt like I could relate to this where it was, he was talking about, um, maybe the end of desirability, but I wonder am am I missing something because it's much bigger than that.

Hayden: Yeah. It's not just desirability. It's also identity and belonging. For gay men in particular, in which people might argue that we're hyper-sexualized, we, we, we are hyper-sexualized within our community. It's very much driven by status, the way that someone looks, you not only want to be the trophy spouse but you want to have a trophy spouse. To think of yourself as aging and all of, of what goes along with aging is the idea of not being attractive anymore. Not physically being able to do as many things. You, you worrying you're concerned about being seen at all.

Jesse: And so when Manny talks about gay death, like, is that, is that a term known in the gay community or is that language that Manny is using that Aziz identifies and understands, but it's not necessarily a widespread term.

Hayden: It's not a term that I've used, but in the context of how he uses it, I have a place of knowing. Yeah, I think he was talking to me and talking to a lot of gay men. Your desirability goes down as you get older. And I think everyone has that experience it's ubiquitous to being alive, but there's something even more, um, damaging and, and it's a heightened concern that you lose your standing within your gay community, just because you're, you don't look as good. And this has compounded upon sort of the larger society that you feel ridiculed and excluded from just by being gay. And I think, you know, if gay men are being honest, we can be very objectified. Even above and beyond what I see in sort of the straight community.

And yet many of us are, are critically aware of that objectification yet, we'll fall into ways in which perfecting and primming and prodding our bodies and kind of nipping and tucking at it, and working out to the nth degree, is something that we often fall into. So it's, it's an extremely painful position and proposition and framing that Manny really offered us.

Jesse: So we go from in that same answer, we go from, you know, Manny coming in and saying, ah, I don't know how that question sits with me, why don't you go first? And then Aziz shares that, you know, Hey Manny, I'm a, I'm an anxious attacher and then Manny comes back with this. Um, This is the first date maybe a half an hour in. And, you know, does this feel like first date material to you?

Hayden: No, it doesn't. And I think, you know, I have some questions, like, is it actually the experience of being a part of this project? Is it having the coach. Is it having the questions? I think the questions probably elicited that. And I think, you know, Aziz in, in, in, in his own way is kind of, he continues to encourage Manny to take that plunge. You know, he said, what are you afraid of? He kept going back to that question. As Manny as, you know, from the way I interpret it kind of exploring with himself like, do I really want to go there and really answer this. Yeah, children, dogs. And then Aziz says, what are you afraid of? And then he talks about sort of this gay death, this idea of the death of desirability and furthermore, the death of identity and belonging within the gay community, period. But no, it, it definitely felt like it was an opening experience for both of them. That something that I don't hear about happening on first dates.

Jesse: And in your perspective, should it?

Hayden: Um, you know, you're, you're talking to someone that I'm like, look, no time like now, why not?

Jesse: Um, I guess like, even to back it up a little bit, like when you think about how we form, how we form attachments, how we build relationships, um, I think so much of what we're doing with setting people up on these dates and trying to skip the, the bullshit, small talk kind of getting to know you things, you know, I wonder. Is there a relevance in those kinds of small talk, getting to know you questions or, you know, is it okay as, as we are building relationships to kind of fast forward through that and, and go right in for the deep stuff?

Hayden: I'm going to give you an unsatisfying answer and it depends. It really genuinely depends. Small talk has its purpose. That's time for people to understand the landscape of the relationship. Is this person a danger? Let me understand the cadence into which they speak and their body language. Let's talk about something that's really comfortable to talk about. Let's talk about our pets. Let's talk about something that we're all experiencing, before we start to go to the more tender spots within ourselves, where really it's kind of sacred fertile ground for all of us. But I will say this. Generally, I have been thanked for going that deep on the sooner side, rather than waiting later.

Jesse: And kind of to put a tool in our tool belt, as we're setting people up on these dates, what's a question you think people should ask each other on a first date?

Hayden: Uh, I don't know, like, I can't believe this is coming up, like, do you think about your death? Do you think about, yeah, like your legacy? What do you want to leave behind? And it's such a taboo topic in our American culture. I think talking about death really as an opportunity to see how people think about their own life and how they want to live it.

Jesse: Before we go, I just want to be really clear. My friend Hayden will be back. I love the way he looks at the world and I want more of that in our dating lives.

Hayden: If the bed isn't set well, and if my special candles aren't gone and I don't have Kenny G playing on the background, I'm not going to get wet.

Jesse: If you'd like to be set up by us on a future date, go to thisisdatingpodcast.com. This is Dating is produced by Jesse Baker and Eric Nuzum at Magnificent Noise. Our production staff includes Hiwote Getaneh, Eleanor Kagan and Taylor Hansen. We also received help from Esther Perel, Courtney Hamilton, Robert Smith, Julia Natt Julia Silbergeld, the Quarantine Love Project, Hayden Dawes, Lulu Krause, and Eva Wolchover. Original music production and sound design by Paul Schneider. Logan Ury is our consulting producer and the executive producer of This is Dating is Jesse Baker.

Interested in becoming one of our daters on a future episode? Just go here to apply.